She has crimson hair which is tied up in bun at the back and light blue eyes.

In her private clothes, Aoi wears dress and white underwear, and a boots without legwear.

She is a really tough girl that hates boys. She also isn't afraid to kill and is willing to take risks as seen in RAIL WARS! Episode 2  when she tries to defuse a bomb.

She was trained in hand to hand combat, weapons, and bomb disarmament training by her father who was a police officer.

Aoi sees Haruka Komi as a friend and comrade, as well as a rival in love. 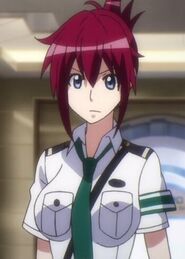 Aoi shown in episode 5 without pantyhose.

Reflection of her unser skirt 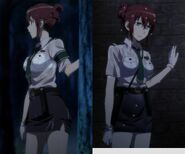 Aoi sleeping at Train, without skirt and shoes

Aoi ripping her skirt for running 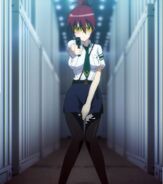 Aoi get shot from Naoto, that she can't wears pantyhose

Aoi putting her uniform on

Aoi mad at Takayama when he don't train seriously

Aoi hiding from a bomber with Takayama

Aoi got tired after defusing bomb

Aoi defusing a bomb in the station

Retrieved from "https://rail-wars.fandom.com/wiki/Aoi_Sakurai?oldid=5278"
Community content is available under CC-BY-SA unless otherwise noted.