Haruka Koumi (小海 はるか, Kōmi Haruka) is one of the main characters of RAIL WARS! -Japanese National Railways Security Force- series. She is a friend of Naoto Takayama and a member of the Fourth Vigilance Squad.

Haruka is a girl with pinkish hair that flows down her back and very well endowed body. While working, she is seen in her security uniform, which is made up of a top with a tie and a skirt, and a flesh-color pantyhose. She also wears black leather shoes.

Haruka is a very shy and nervous girl, but she is good at studying. She has an outstanding memory, being able to memorize timetables of all train which pass Tokyo Station[1], including cargo and passenger trains.[2] However, due to having slow reflexes she accidentally fired rounds to the ceiling during short-term training during shooting practice, and nearly cried because of that.[3]

She has good looks[4] and a sharp mind. When she was a child, she accidentally got trapped in the basement of the Transportation Museum, until Naoto rescued her.[5] Due to that Haruka gets jealous if she sees Naoto getting friendly with any other girl except Aoi. Her grandfather used to be president of Japanese National Railways.[6] She became acquinted with Prince Bernina of Atera, when she was studying in England.[7] Because of that, when Bernina arrives in Japan, Haruka acts as an interpreter.[8] Although Haruka's father disliked JNR, he has accepted her participation in student OJT. Katamachi, the master of Tokyo Station, is an acquaintance of her grandfather.[9]

When the two first meet, Haruka became embarrassed when Naoto looked at her panties. She is his first friend, which was when they were starting their railway classes. Even though there have been embarrassing moments, Haruka is always kind to Naoto. There have been some hints of romance between them. However, a love triangle of sorts seems to have formed between Haruka, Aoi, and Naoto, though none of them have admitted it.

They met at the opening ceremony of the Rail Wars Academy. They soon became friends. She is the other female member besides Haruka Koumi & Nana Iida of the Fourth Vigilance Squad. Haruka sees Aoi as both comrade and love rival.

Kōmi's dress after it is ripped by a branch 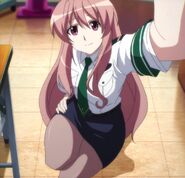 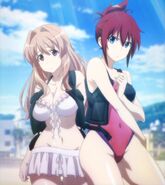 Add a photo to this gallery

Retrieved from "https://rail-wars.fandom.com/wiki/Haruka_Koumi?oldid=5763"
Community content is available under CC-BY-SA unless otherwise noted.